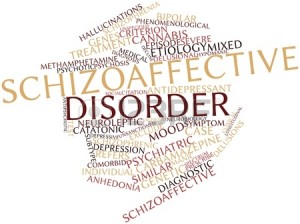 What is Schizoaffective disorder?

To diagnose schizoaffective disorder, a person needs to have primary symptoms of schizophrenia (such as delusions, hallucinations, disorganized speech, disorganized behavior) along with a period of time when he or she also has symptoms of major depression or a manic episode. (Please see the section on Mood Disorders for a detailed description of symptoms of major depression or manic episode). Accordingly, there may be two subtypes of schizoaffective disorder:

(a) Depressive subtype, characterized by major depressive episodes only, and

(b) Bipolar subtype, characterized by manic episodes with or without
depressive symptoms or depressive episodes.

The most effective treatment for schizoaffective disorder is a combination of drug treatment and psychosocial interventions. The medications include antipsychotics along with antidepressants or mood stabilizers. The newer atypical antipsychotics such as clozapine, risperidone, olanzapine, quetiapine, ziprasidone, and aripiprazole are safer than the older typical or conventional antipsychotics such as haloperidol and fluphenazine in terms of parkinsonism and tardive dyskinesia. The newer drugs may also have better effects on mood symptoms. Nonetheless, these medications do have some side effects, especially at higher doses. The side effects may include excessive sleepiness, weight gain, and sometimes diabetes. Different antipsychotic drugs have somewhat different side effect profiles. Changing from one antipsychotic to another one may help if a person with schizoaffective disorder does not respond well or develops distressing side effects with the first medication. The same principle applies to the use of antidepressants or mood stabilizers.

There has been much less research on psychosocial treatments for schizoaffective disorder than there has been in schizophrenia or depression. However, the available evidence suggests that cognitive behavior therapy, brief psychotherapy, and social skills training are likely to have a beneficial effect. Most people with schizoaffective disorder require long-term therapy with a combination of medications and psychosocial interventions in order to avoid relapses, and maintain an appropriate level of functioning and quality of life.